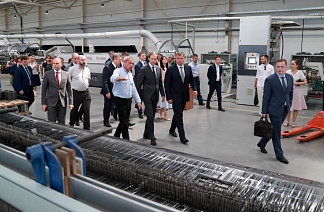 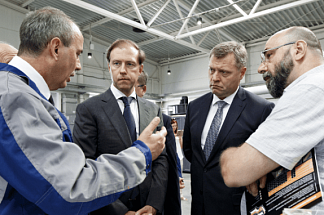 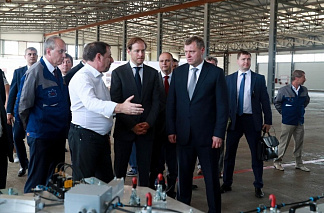 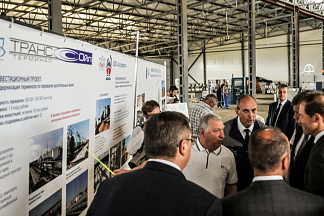 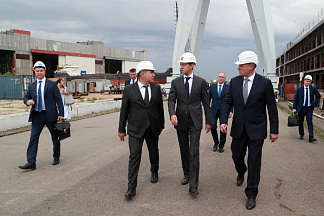 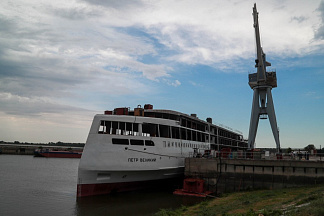 On June 28, the Minister of Industry and Trade of the Russian Federation Denis Manturov arrived in the Astrakhan region for a business visit. Together with the acting Governor Igor Babushkin, they visited several industrial enterprises in the region, including companies located in the Special Economic Zone Lotus.

Currently, two new productions are about to open in the SEZ Lotus: biodegradable drip irrigation tubes of the company Svoyee and the first production line of Gexa Lotus, manufacturing geosynthetic woven materials for roadbed reinforcement.

The head of the Ministry of Industry and Trade of the Russian Federation Denis Manturov and the acting Governor Igor Babushkin were shown the technological process of geosynthetic fabric production. At the heart of the production is polypropylene: it is melted down until it becomes a film, cut into threads, from which a five-meter wide cloth is woven and placed under the road surface, strengthening it.

According to Alexander Kochetkov, Director General of the company, the first production line planned capacity will be 150 thousand square meters of geosynthetic fabric per month. The final implementation of the project will increase the production capacity to 500,000 m2. The company has also demonstrated other types of products that will be produced in the Astrakhan SEZ, such as various types of geogrids, disposable medical products, which are now produced at the parent company "Gexa - nonwovens materials".

The Director General Ilya Vishnevetskiy demonstrated the production process of drip irrigation tubes on the Svoyee company site. Now two production lines with total capacity of 200 million running meters of pipes per year are installed in the plant. The prospect of expansion is up to 500 million meters per year. This year it is planned to produce 100 million running metres of pipes. Orders for the first products have already been placed. Both neighbouring Russian regions and neighbouring countries are showing interest.

On the site of LLC Svoyee, Sergey Milushkin, Director General of PJSC SEZ Lotus, told the head of the Ministry of Industry and Trade of Russia and the acting Governor of the Astrakhan region about the current development of SEZ Lotus, the infrastructure already built and the future residents. For example, another resident of the Astrakhan SEZ, Rybniye Korma company, is beginning to build its future plant next to Svoyee.

This year the companies Traisoyl Terminal and Astraflot are going to get the status of resident of the SEZ Lotus. The first one will modernize the terminal for transshipment of vegetable oils, while the second will work on the construction of a complex for processing, storage and transshipment of grain and legumes. Stroyderplus Lotus and Naval Design International, whose production will contribute to import substitution programme in the shipbuilding industry, are also starting to implement their projects.

Then the Minister of Industry and Trade of the Russian Federation Denis Manturov and the acting Governor Igor Babushkin visited the shipyard Lotus - anchor resident of the Astrakhan SEZ and member of the United Shipbuilding Corporation. At the moment two cruise ships and a dry-cargo ship are being completed, and the keel of a non-self-propelled cargo pontoon was recently laid. Today, in the presence of the Minister and the acting Governor, the plant launched one of the two chemical tankers, which are under construction, into water.

The biggest order in the company’s history is the first cruise liner in modern Russia Peter the Great. The minister of Industry and Trade of the Russian Federation Denis Manturov and the head of the region Igor Babushkin inspected the 141-meter long four-deck liner, which was put into water a month ago to be completed. Peter the Great will be equipped as a five-star hotel with suites, restaurants, gym, swimming pool and spa. It will take tourists to the Caspian and Black Sea. The cruise liner is expected to go into the navigation in 2020.

After the visit to the enterprises in the SEZ Lotus a meeting was held to discuss the future of shipbuilding in Astrakhan, as well as the further development of the region's industry in general.

“The Astrakhan region has a good potential, especially taking into account the fact that we saw a 9 percent growth of manufacturing industry in the last four months," - said the Minister of Industry and Trade of the Russian Federation Denis Manturov after the meeting, - and, in addition to shipbuilding, the main industry segment, we have agreed to actively develop many other sectors”.

“Already existing plants have the potential to expand related industry sectors: light industry, agriculture and many others - said the acting Governor Igor Babushkin, - Undoubtedly, we will encourage our contractors to invest in the Astrakhan region even more".